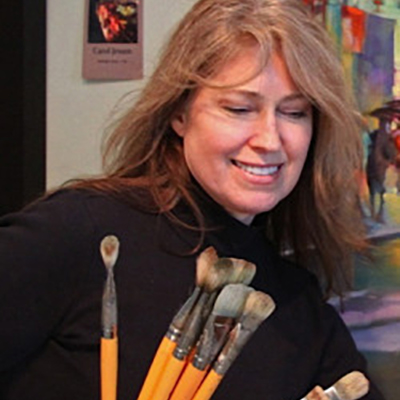 Carol Jessen was born and raised in Oakland, California. She studied at San Francisco State University and holds a bachelor of arts degree in journalism and biology. After graduating she donned her backpack and traveled the many corners of the world including Europe, Iran, Afghanistan, Pakistan, India and many countries of the far east. She would then go on to study at the Mendocino Art Center and the Academy of Art in San Francisco.  The far east left a vivid impression which prompted her to reside in Kyoto, Japan for a year and on a later trip study Japanese woodblock printing in the Japan Alps with Toshi Yoshida. She was also tutored in design, composition and the psychology of perception by William S. Lansberg.

Hunters Point Shipyard, the once abandoned navel shipyard in San Francisco, is now home to one of the largest artist communities in the United States where Carol enjoys her studio by the bay. Her primary mediums are oil painting, pastel and various forms of printmaking and collage. Her work has been featured by Next Monet and Editions Limited where her original oil paintings and pastels sold out at the New York Art Expo in 2004.  Her paintings have also been featured on book covers and the film “Click” starring Adam Sandler.